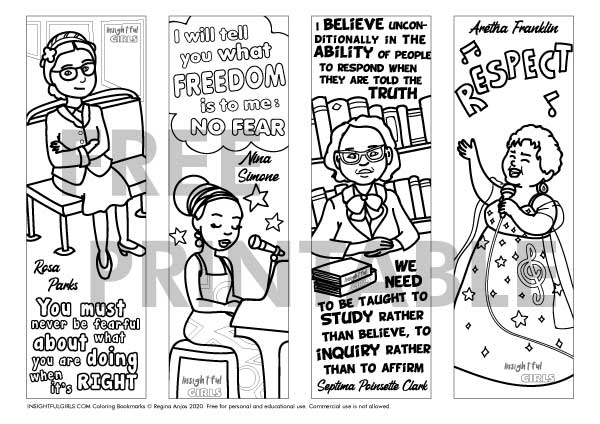 Insightfulgirls.com Coloring Bookmarks © Regina Anjos 2020. Free for personal and educational use. Commercial use is not allowed. 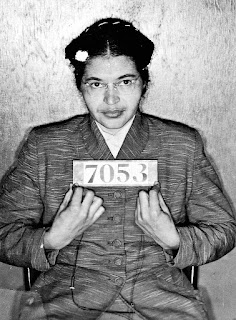 “You must never be fearful about what you are doing when it is right.” (Rosa Parks)

Rosa Parks (1913—2005) helped initiate the civil rights movement in the United States when she refused to give up her seat to a white man on a Montgomery, Alabama bus in 1955 and got arrested by a police officer. Her actions inspired the leaders of the local black community to organized the Montgomery Bus Boycott began the day Parks was convicted of violating the segregation laws 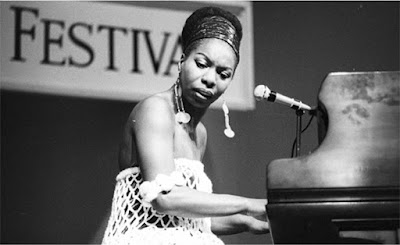 “I'll tell you what Freedom is to me. No fear.” (Nina Simone)

By the mid-1960s, Simone became known as the voice of the Civil Rights Movement with songs like "To Be Young, Gifted and Black" and "Mississippi Goddam". She wrote "Mississippi Goddam" in response to the 1963 assassination of Medgar Evers and the Birmingham church bombing that killed four young African-American girls. 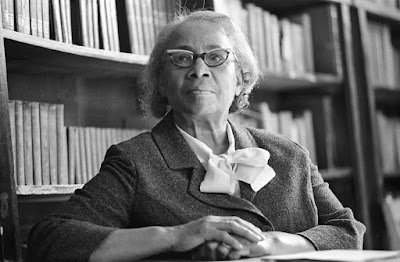 "I believe unconditionally in the ability of people to respond when they are told the truth. We need to be taught to study rather than believe, to inquire rather than to affirm" (Septima Poinsette Clark)

Septima Clark (1898 – 1987) was a black American educator and civil rights activist. Clark developed the literacy and citizenship workshops that played an important role in the drive for voting rights and civil rights for African Americans in the Civil Rights Movement. Clark urged that "knowledge could empower marginalized groups in ways that formal legal equality couldn't."

She became known as the "Queen mother" or "Grandmother" of the Civil Rights Movement in the United States. Martin Luther King, Jr. commonly referred to Clark as "The Mother of the Movement". 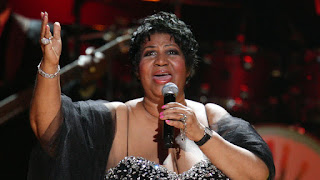 The first woman to be admitted into the Rock and Roll Hall of Fame in 1987, she has been described as “the voice of the civil rights movement, the voice of black America” and a “symbol of black equality”.

Aretha’s timeless signature hit “RESPECT” was essentially about a woman demanding respect from her lover. It also became a calling card for the civil rights movement and women’s movement during the time – both of which matter to her because she is a black woman. “Respect” included lyrics that called for respect for women in all capacities – cooking, cleaning, or working hard outside the home (which was a rarer occurrence in 1967). She was super feminist and fighting for others rights at all time.

Coming of age in Detroit in the 50s, Franklin was surrounded by civil-rights activists from a young age, and spent her trailblazing career supporting those who fought for equality—and setting an example herself as an American success.